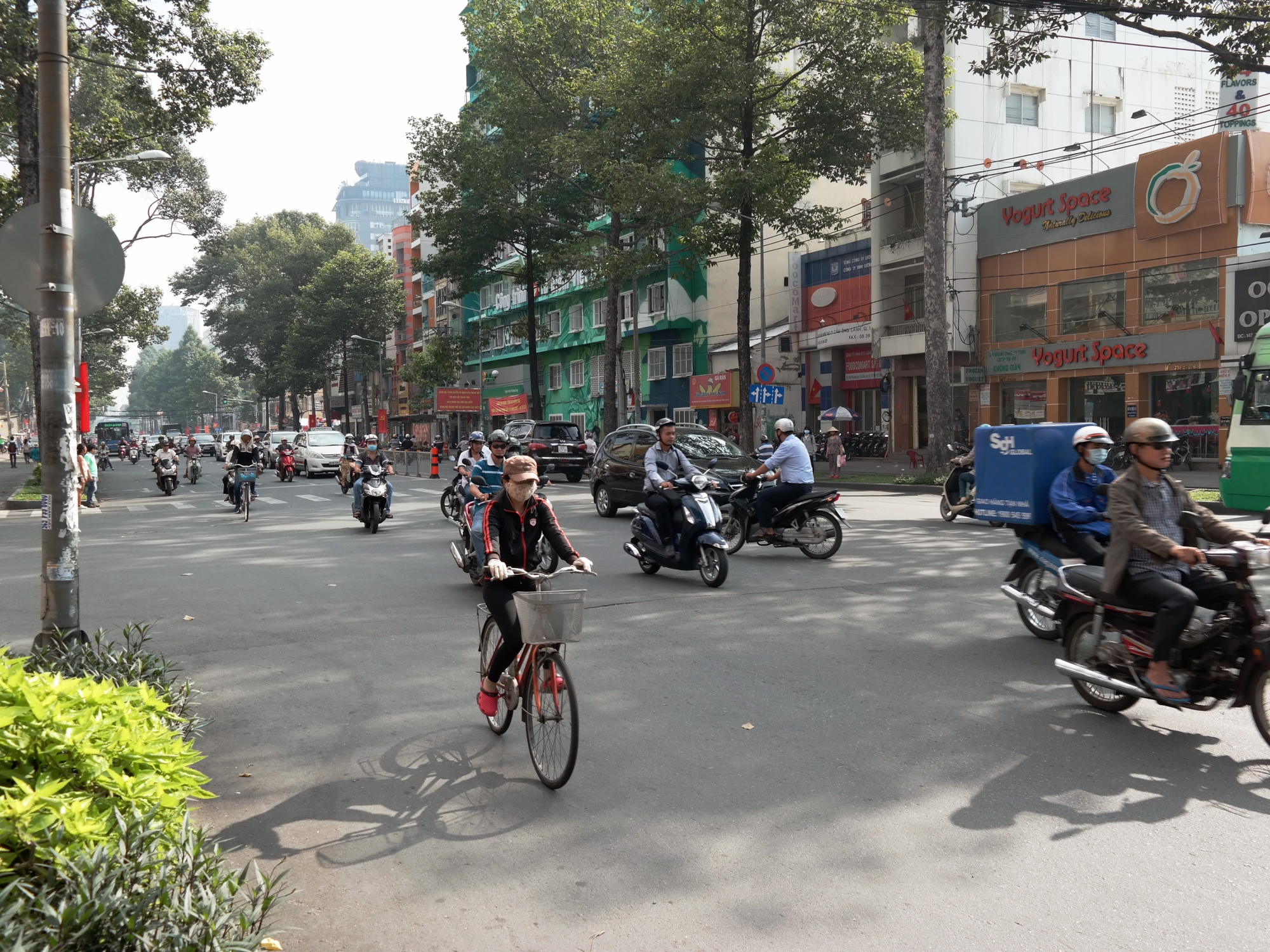 Second, I had about six weeks to get to Hanoi (1,000 miles north), and then just two weeks to reach Bangkok, where I’d fly to Tokyo to meet my girlfriend Emily. Of course, this was all “part of the plan.” But there’s a certain realness that creeps over you whenever you come face-to-face with something you’ve been anticipating for months. It’s never what you imagined. There’s always some variable you didn’t account for. Confusion resounds, and decisions (not all of them good) are made in the space of microseconds. The full five-sensory onslaught of this dream-turned-reality fills you with panic—but also a sort of resolve, a resolve to fulfill the dream you imagined for yourself, and to be more than just the person you thought were. So you trudge on. You’ve got not other choice anyway—that return flight’s still two months (and two countries) away.

Third, I didn’t have any cash. This is a problem for procuring a visa, which almost always has to be paid in cash (usually U.S.). Oddly enough, the Vietnamese immigration officials allowed me to pass through security to use an ATM out in the main terminal. Mind you, I just waltzed by security, which was given no word of my present predicament, and so expected them to draw their weapons (just batons) on me, assuming I was some heedless agent of international espionage or something. But they didn’t seem to give a shit. They were holding my passport hostage, so they must have been quite certain I wasn’t going anywhere without my passport. And this was true.

I got some cash, acquired my three-month visa, and gathered my backpack from the baggage claim. The thing was just lying on its own in the middle of the terminal, the thing I am expecting to be living out of for the next two months. Pretty much anyone could have walked in off the street and take it—if only they wanted to. But I guess no one did.

After buying a SIM card, I walked out into the stifling nighttime humidity of southern Vietnam. I found a cab driver—or rather, a cab driver found me—and we took a 20-minute ride to my hotel. This city is strange and smelly and flooded with motorbikes. Actually, some parts of it remind me of Brooklyn, what with the huddled storefronts and open-air nightlife, the music and clamor emanating from every direction. The comparisons end there.

I reached my hotel, checked in, and was immediately put on guard when the receptionist asked to hold onto my passport for the duration of my stay. Apparently this is their collateral. I guess they don’t trust their guests to pay upon check-out, so they hold their passports hostage instead. I refused to abide this policy and handed them a photocopy of my passport instead. As I would later find out, though, this is policy administered at pretty much every hotel, hostel, and guesthouse in Vietnam. Whatever.

I bought a motorbike the day after I arrived in Saigon—a manual trans 110 Honda Win with a Sufat engine. (Sufat is a Honda-certified Vietnamese manufacturer, and one of the more highly coveted engine brands in the country.) I purchased the bike from from a super friendly Aussie who had just completed the journey from Hanoi to HCMC.

I spent the next few days cruising the streets of Ho Chi Minh, hanging with tourists and drinking really cheap, really mediocre lager beer. Occasionally I’d meet a local who spoke decent English, and we’d talk at length about our respective cultures. I played pool with a prostitute who told me she hated my country. But she was friendly otherwise.

The food is amazing and outrageously cheap. An order of noodles with mixed veggies and meat can be found for around 40.000 dong (a little less than $2). And there’s no tipping—a welcome reprieve for your traveling Yank. The coffee is also amazing—sweet and intoxicating and somewhat chocolatey.

I read Graham Greene’s The Quiet American, thought it was quite fitting for my present circumstances. It’s a fantastic read with some highly compelling characters. For those who are curious, it’s a novel that takes place in Vietnam (primarily Saigon) during the French Indochina War (1946-1954). It’s a fascinating and tragic look at the toll of Western foreign policy in the post-war years.

Riding in HCMC traffic is wilder than pig tits. I think us Boston drivers have a leg-up, though: You just need to assert yourself and tell courtesy to go fuck itself. Otherwise the whole system breaks down.

On Friday, I went to the “Vietnam War Relics Museum.” As you can imagine it’s pretty rife with anti-American propaganda. They have a few captured U.S. tanks and helicopters on display outside, and the history is all pretty distorted to make the North Vietnamese and Vietcong look like heroes who never committed any atrocities of their own (of which there were plenty). That said, a good portion of the museum consists of large-print monochrome photographs from the war, and photographs don’t really lie—just the captions. It was interesting nonetheless.

The plan is to leave Sunday. I want to see this beautiful country I keep hearing about.